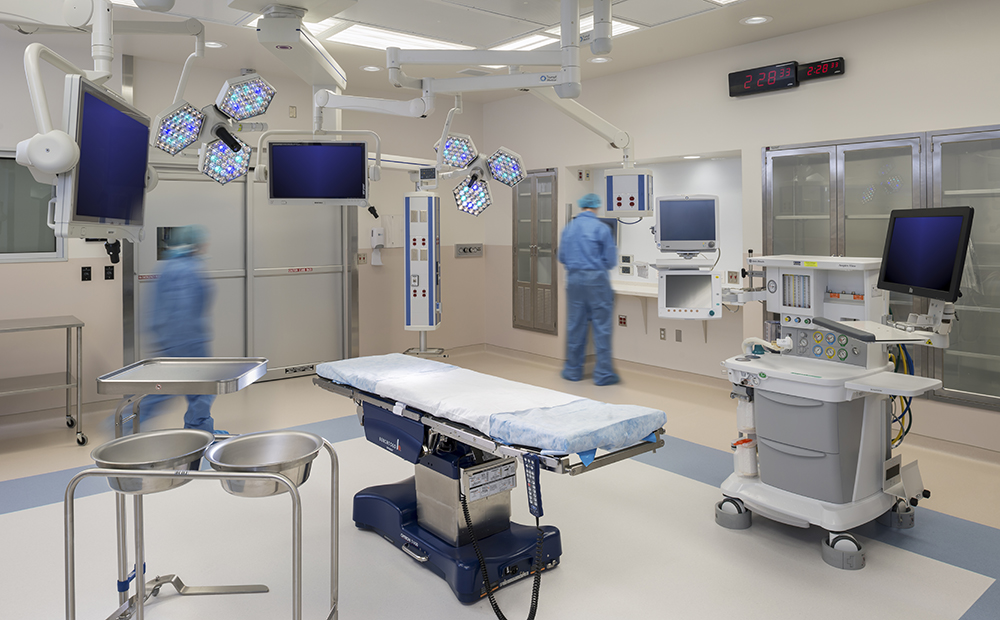 After completing an initial master planning effort, Inova Loudoun Hospital in Leesburg, VA identified several areas and services of the hospital that required renovations and upgrades to provide its patients with the best care possible.

E4H completed the following projects as part of this effort: 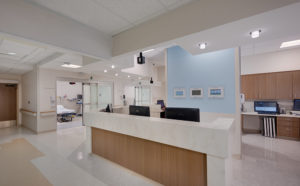 HEART AND VASCULAR EXPANSION AND RENOVATION

Construction for the Inova heart and vascular expansion and renovation at INOVA Loudoun Hospital began in August 2016 with completion at the end of 2017. The project includes renovating two existing cath labs and two nurse stations. Additionally, one EP/flex cath lab, eight prep/ recovery rooms, six minor procedure/prep recovery rooms, a new clinical area, staff support spaces, and new waiting, registration and consult rooms for patient support were added. This project consists of four phases to allow uninterrupted operation of the heart and vascular department throughout the construction processes. Originally, the cath labs were split between phases 2, 3 and 4. However, phasing was condensed when nearing the completion of the new cath lab in phase 2 to allow both existing labs to be turned over in their renovated state at the end of phase 3. 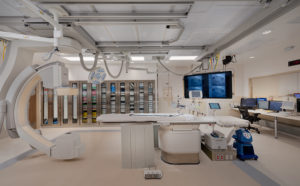 Designed with an atmosphere to ease the patient experience before and after same-day surgeries this renovation of 5,000 square feet serves Loudoun County on Inova’s Loudoun Hospital Center campus. In order to improve patient in-flow the project scope includes upgraded waiting, reception, and staff spaces. It also comprises a refurbished treatment room and a new state-of-the art endoscopy suite that supplements the existing operating theaters. Finishes implemented evoke calm and inspire participation with nature for patients and their families. Alcoves in the waiting area provide privacy for visitors and those seeking refreshment may use the coffee bar.

Loudoun Hospital has experienced significant growth and expansion to it’s number of OR’s without corresponding growth to support areas such as sterile processing, prep and recovery bays and staff lounges/locker rooms. The hospital has retained E4H from initial planning through construction services to design the largest expansion to their surgical department since the opening of the hospital in 1994. Efforts included coordination with equipment planners for all phases, kicking off with a robust coordination of both existing and new SPD equipment to facilitate intricate phasing and move plan. 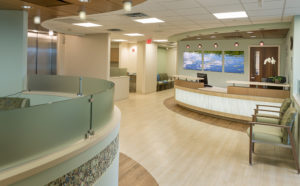 The original 1996 Hospital structure included a 7,500 sf Intensive Care Unit (ICU) on the 1st floor, which was subsequently replaced and relocated to the 2nd floor as part of the West Wing Addition in 2008 and subsequently renovated with misc. renovations. Since that time, the old ICU had been used partially for various other functions and is currently used for a 6-bed Intermediate Care Unit and occasional overflow for the 2nd floor ICU. The current plans are to reactivate the old ICU to become a new Surgical-Trauma Intensive Care Unit “STICU” to support the hospital’s new Trauma Center program. The proximity of the old ICU to the Emergency Department & Surgical Department makes it ideal as a STICU. The project consists of full interior finish & fixture upgrades including lighting, ceilings & plumbing fixtures throughout; renovations for additional equipment and supply capacity; renovations and improvements to nurse station core area & staff break room; replacement of all millwork to include new millwork nurse stations to replace the existing modular nurse station systems furniture; mechanical upgrades to an existing patient room to become a second “Isolation Room”. The finishes, fixtures and millwork will be based on the recently renovated Emergency Department nearby.

Multiple phased renovations for Patient Units were constructed and are underway/planned, totaling approximately 90 beds across 65,000 SF. As the first phase to enable swing space/phasing, a new 12,800SF, 14 Bed Pediatric Unit was provided. A significant challenge and goal for the Pediatric Unit was to design a space incorporating state-of-the-art healthcare technology in an environment friendly and comforting not only to children, but also the parents and family. The floor plan is laid out to allow for maximum privacy and comfort of the patient and families without sacrificing necessary spaces and functionality for healthcare providers. The finishes, furniture and custom millwork provide for all the complicated needs and functionality of pediatric care in a warm, playful and comforting environment reminiscent of home. 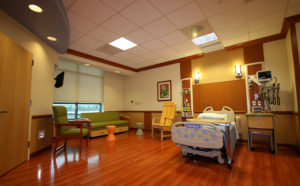 Extensive upgrades and improvements were required throughout multiple phases of the master plan implementation. Both building additions and interior renovations placed additional capacity and load on existing infrastructure which then presented unique challenges for distribution to expanded corners of the campus. Exhaustive field investigations and creative thinking resulted in cost-effective applications implemented as phasing opportunities allowed. Exterior routing in a concealed fashion and shared pathings for future phases are two examples of major cost savings found during the projects. In addition, multiple new AHU’s and other large infrastructure items were required to be placed new or renovated into existing departments. Existing Penthouses were master planned for current and future infrastructure needs